When we talk about sexual problems for men, what automatically comes to everyone’s mind is either erectile dysfunction or premature ejaculation. But there is more to it. The problem is not just on how or when you ejaculate, it’s about how you feel about the whole sexual activity.

In this blog, we will explain all about sexual problems for men and what are the myths and facts related to them.

Sexual problems occur while making sexual contact with your partner. To understand the entire process of what happens in your body when you perform any sexual activity we will break the entire process into different stages of your sexual cycles. #1 The First Stage of the sexual cycle is DESIRE

Desire means all the conceptualize fantasies about sex. When you have a strong feeling or urge of making out, it is called Sexual Desire

sexual problems for men: What can go wrong with sexual desire?

A man who has a deficiency or absence of fantasies or desires is suffering from this disorder. Usually, these disorders are physical in nature, but there are some psychological factors that can be responsible for this disorder.

Antidepressants can be helpful if a man is depressed, but they can also lower sexual interest.

If low libido is caused by an androgen deficiency (low testosterone) that has been confirmed by a blood test, testosterone replacement therapy may be needed.

Low libido related to stress or tiredness may be helped by stress management strategies or counseling.

Who can help a man with Male Hypoactive Sexual Desire Disorder?

You must consult a male sexual health specialist(Andrologist) at IASH Jaipur for low libido treatment in Jaipur. if you think you are suffering from low libido or low sex drive. It is important to rule out any physical cause for the same by taking a detailed sexual history, physical examination, and doing some blood tests. If there is no physical cause identified, it is important to consult a clinical psychologist who has good experience in treating desire problems.

If you are suffering from low libido, book an appointment with our doctor or Call us at 9602081813

#2 The Second Stage is Sexual Arousal

Sexual arousal is the physiological response to sexual excitation, so for females its lubrication, and for males its erection.

What happens with  females:

It’s been witnessed than many women have less interest in sexual activity, which is termed as the female sexual interest arousal disorder. These are women who are unable to achieve adequate vaginal lubrication while consummating, which is a sign of no sexual arousal.

What happens with Male:

When a male is not able to have sexual arousal he doesn’t feel a thing in his reproductive organ. This sexual problem is referred to as erectile dysfunction or impotence.

It has been said that this is one of the most common sexual problems for men. About 1 in every 7 men is suffering from erectile dysfunction and about three percent of the men treated for this dysfunction complain about still being impotence or dysfunction.

Reason and Causes of Erectile Dysfunction

What we need to determine in male erectile dysfunction is the real cause, Whether it’s psychological or physiological.

Once the proper diagnosis of erectile dysfunction is made then you may want to have the right treatment for dysfunction.  Many recommend treating these patients with sildenafil, or tadalafil. These medicines are another form of popular medicine viagra Cialis. You must have seen plenty of commercials related to these disorders. Kegel exercise, Garudasana in yoga, and Mediterranean food diet are considered to help in erectile dysfunction naturally.

Institute of Andrology and Sexual Health (IASH) is the only institute where all ERECTILE DYSFUNCTION patients get the first consultation from our team of experts (Andrologist, Sexologist, Sex Therapist). If you are suffering from Erectile Dysfunction then ask for online Consultation or immediately Call on 9602081813 and Book Appointment.

#3 The Third Stage is Orgasm

Orgasm is the highest feeling of excitement. It is the plateau range where the feeling of pleasure reaches its highest level and then starts diminishing. Sexual performance is said to be incomplete when there is no orgasm. Man and women or both partners should attain orgasm to have complete satisfaction.

When someone is not able to attain orgasm, they are said to be suffering from Orgasmic disorders

You will be surprised to know that a small percentage of women over the age of 35 report never experience an orgasm.

When the man ejaculates before or immediately after spent entering is typically associated with Premature ejaculation or PE.

Early ejaculation can be either because of desperation in both partners or when men are really very anxious about the sexual performance or have performance anxiety then they might experience this situation called premature ejaculation. The real causes for premature Ejaculation need to be diagnosed before treatment.

The treatment of this disorder is either behavioral techniques or medications.

For more complicated problems we also use medications such as SSRIs.

The latest and Advanced Shock Wave Therapy Machine from Germany is now available in Jaipur at the Institute of Andrology and Sexual Health (IASH) for a painless, non-invasive, drug-free, safe, and effective premature ejaculation treatment with HA fillers in Jaipur.

Some other common sexual problems for men

The most common myth among people around the world is that sexual problems are all about Ed or PE. Some people even assume the size of the penis is the main issue for sexual dissatisfaction. But according to the Internation institute of sexual Medicine, there is more concern beyond ED.

The first disorder is genital pelvic pain; a disorder formerly known as dyspareunia.

Men who have pain during or after intercourse are usually suffering from psychological causes. The painful ejaculation is not due to any physiological or medical condition.  The treatment for such disorders is individual psychotherapy as the reason they have pain is for psychological reasons. For example, many men and women in India have been taught that sex is bad and only bad people can enjoy sex time. They may have the fear of impregnation.  So these are all issues that need to be addressed to treat this genital pelvic pain disorder

When the man has no control over ejaculation, he might be suffering from some common sexual problem like nightfall, dhat syndrome. In such cases, men ejaculate while urinating or can have wet dreams. In females, it can be called vaginismus where women experience involuntary constriction of the outer third of the vagina preventing penile insertion right again.  This is also psychological in origin, maybe religious upbringing, fear of impregnation, etc.

Nightfall is a natural thing to happen, but when it gives health problems, it needs to be consulted by our experts. If you are seeing symptoms like pain, an unusual smell, or bloody semen or urine, you need to consult the best sexologist in India.

If you are suffering from Nightfall problems, book an appointment with our doctor or Call us at +91 9602081813

In recent years the cases against sexual abuse, molestation, and harassment have grown rapidly in every age group. What do you think the reason can be?

Sexual problem causes are both psychological and physical. There are hormonal issues or psychological issues which are responsible for the desperate urge for having sex. When someone is not able to control their feelings they develop a certain kind of disorder. Some of the serious disorders that need urgent attention and need treatment are Paraphilic disorders.

This is a psychological disorder that involves men in unnatural and abusive sexual activity. There are eight main disorders under Paraphilic disorder.

The takeaway of the Blog

Sex is a phenomenal activity of every living thing. You cannot avoid it for a long period of time. People are becoming aware of it and are being experimental to make their sexual life exciting and healthy. Being aware and educated is the best way to avoid sex diseases.

If a couple is having first-time sex then the chances of getting STDs is not any less as compared to a couple who had been active.

IASH is dedicated to creating sexual awareness in India

Dr. Chirag and other expert doctors are making every possible effort to make people understand the need for sexual health, and that’s why we at IASH, Jaipur provides a youtube chat show named “Men are from Mars and Women are from Venus” to answer various unanswered questions about sexual health and to help people overcome their sexual issues.

Under the guidance of professional psychologists and sex doctors, we offer offline and online counseling sessions for people to solve their sexual health issues and dysfunctions so that they can live a healthy and happy married life with their spouse.

We know that not all sexual issues can be treated with surgeries and medication but also with counseling and therapies. Under the surveillance of Dr. Chirag Bhandari and Jaipur’s best therapist, we offer special therapies for treating sexual illness and problems, including a couple of therapies.

If you are also having doubts or want to ask for any sex-related issue, you can call us to get a consultation over the tiniest issue with professional sex doctors. We listen to your problem and provide you the best solution to make your life better both sexually and physically 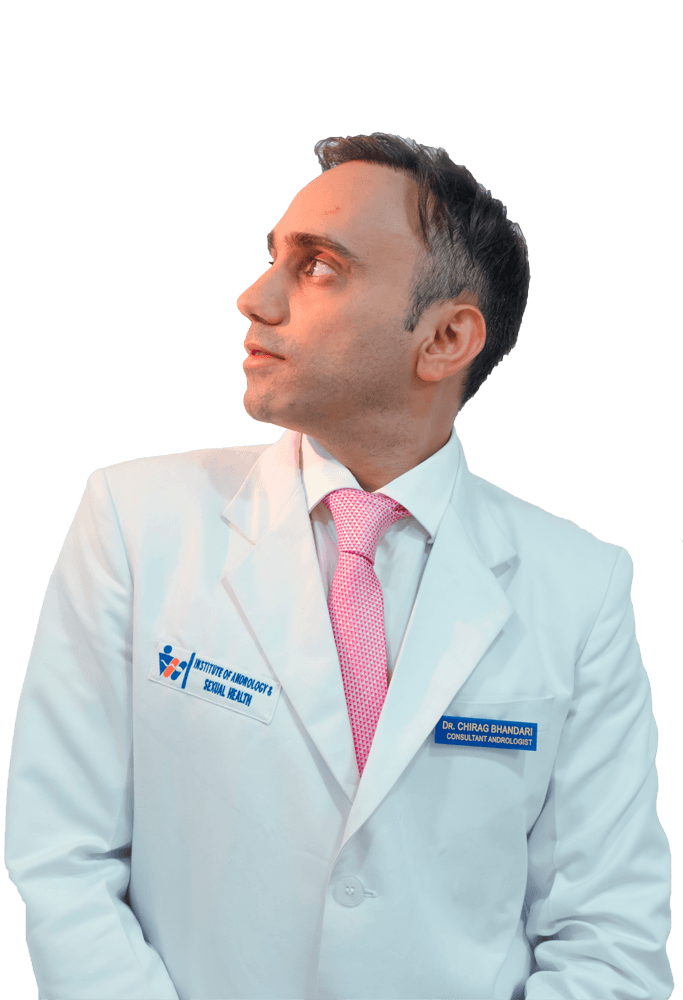